Okay don’t look at me like that. I know you’ve all read something that was this level of humiliating at some point in your life.

I’ll admit it, sometimes I can be a book snob. I looked down on this book because of who wrote it and what it was about. But let me tell you something about this book:

And she openly admits that she had help writing it and had someone helping her to keep focused on writing it. Which is likely why I liked it better than Fifty Shades of Grey. Snooki has actual grammar in here. She has her tenses in the right places and zero spelling mistakes. Which means one of two things:

1)She’s smarter than I thought. Or

2) She had an actual editor who was looking out for her.

Likely, it’s both. She was smart enough to get an editor to look out for her.

This pint-sized weirdo wrote a book that was both funny and ridiculous. And neither took away from the other. In fact, somehow it enhanced it into a book that I really enjoyed reading.

It’s about two cousins who are living life on the shore for a summer to find themselves two boyfriends by the end of the summer and to hook up as much as they feel like. It’s based on Snooki and JWwow and it was just as enjoyable (even more so actually) than the show.

Yes. I watched Jersey Shore. I needed to know what the hell everyone was talking about and why they were so addicted.

I went for the theatrics, I stayed for Vinny and Pauly D.

This book surprised me, and if it makes you feel better about my reading something by Snooki, it only cost me a dollar at the thrift store. 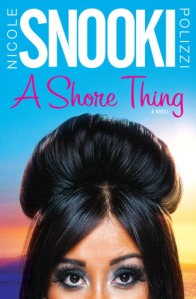