Soooo….remember last week when I said that I wasn’t going to break my stride? Yeah. I broke it. BUT it was for a fair reason and I dare anyone to defy my decision in stopping.

Here’s some TMI for you: PMS boob pains. There are only a handful of things that could stop me when I set my mind to something (two of which are the words ‘Hey, let’s go get a poutine’ and ‘Let’s go watch Outlander’) and the very tippy top of the list is all period related.

Now, I’ve worked out during my period, I’m sure a lot of girls have, but there are two things attached to said period (well, I guess one thing is something trying to DETACH from me, heyo…gross word play.) that will stop me from doing an aerobic exercise:

1) My boobs become two (albeit smallish) sacks of sandbag hell where it feels like someone is continuously punching me in the tit while another person is putting them into a vice. Hello sleeping in a bra because it hurts to move.

2) Cramps that feel like I’m being stabbed by a rusty machete and it hurts to stretch let alone do crunches.

This weekend I had to cancel on plans with someone because the cramps were so bad I couldn’t (and didn’t want to) get out of bed. Instead I had to force myself up to get Advil and then made socks all weekend while watching Scrubs because moving from my Buddha-like sitting position was like being skewered by a katana.

(Upon writing this I realize I know more swords than I thought.)

Anyway, now that that’s all dealt with and I’ve inexplicably lost 5 pounds (I’m going to assume it was the child I never wanted and water weight combo.) I can recharge, restart, and be a little more prepared for the next annihilation of my insides.

All in all…fuck periods. Period. 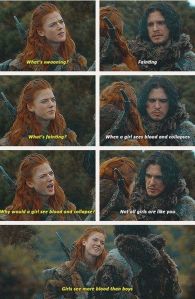 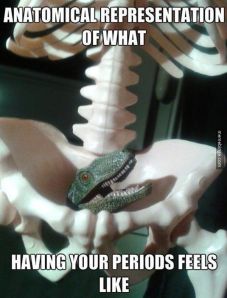