My brother suggested this series, saying that I would love this guy just from his sheer sassy wit. He was right.

Unlike most novels about wizards or magical lands, this one is a cut below (that’s right, I said “below” and meant it as a compliment) and actually makes me feel that I know this person. He doesn’t completely have his life together, he’s not the best at what he does, but he keeps trying (Keep Moving Forward: Wizard Edition. Hello.) and he does the best he can with the tools he has.

Even if that means he has to fight a demon naked.

Hell, one of his potions has tequila in it. I just mean that it wouldn’t have taken this guy 20 years to write one book, and kudos to him because it was just as wonderful and quick witted.

I definitely relate to Harry Dresden, struggling to make ends meet, trying and failing at having a dating life, and his fighting skills are sort of lacking, but nonetheless hilarious. At one point he throws a film canister at a demon just to throw it off his game.

Sometimes no magic is involved and it’s so funny. 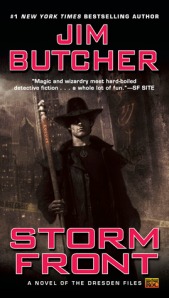 I was a bit of a ramblin’ rose yesterday, so I’ll just leave you with a picture of pure delight for the weekend:

The Swirling Vortex of Terror:

Aka: Being an adult. Having a “real” job. Living the life I want. How does a flaky anxious indecisive nerdling like myself choose how to do all of these things?

Simple: I don’t. I’ve been living in my parents house since my last foray into the wild world of being an adult because the pressure and anxiety of needing money and earning money in a whole other province sort of killed me. It was easier to accept that I wanted to come home to the people that I love and love me instead of keeping in the forward motion that I thought I was going.

I was going backwards though. I was. And that’s only because I didn’t have a well paying job (not in money at least, the love was good there and it was a place of healing.) that I was passionate about.

I came home because there were people here waiting for me that would support me no matter what I wanted to do.

My best friend this week said to me, after my likely 200th job change idea this year, that no matter what, she just rolls with it. She knows that I’ll likely end up changing my job before three more times before I hit 30, knows that I will probably come up with 800 more different jobs that I want by that time too. Knows that I’ll keep at least trying to find out what I want to do and what I’m good at.

Too bad I always have to find out the hard way what I’m not good at.

Not saying that I’m a bad nanny. I absolutely love this job, it’s by far my favourite! It’s the right place for me these days. But every inch that baby grows I know I’m closer to losing that job because all kids grow up. (Except me. I’m Peter Pan.) And as much I would love to be working for my cousins until their babies are in college, I’m 100% sure that won’t happen.

Mostly because that’s insane to have an adult looking after anyone over the age of 15 full time.

One thing I know for sure is that I’m always trying to defeat my own regrets and psychological insanities one by one.

One of my bigger regrets is not choosing English as my major when I was first going into university at 17. I chose Professional Writing. Because that’s what I’ve always wanted to do. Not to mention it was at a great school in Toronto. York University. I failed. And I failed hard. Because I didn’t try. I didn’t get out of bed. I didn’t like being on my own. I didn’t have any friends in the vicinity. (Not ones I was willing to count on at least.)

I bring this up because my other best friend (it’s a tier not a person, after all.) mentioned to me this week this particular moment in time. Because I also thought that I would move to Toronto this week for God knows what reason. That I would move there and finish something I started 10 years ago. Now, I don’t regret my decision to go to York, and I certainly don’t regret my decision to leave York. I really don’t regret anything about that whole situation anymore because it’s been 10 years and I’ve since finished a program in a school and moved on.

And since then, I’ve had this weird hate for Toronto. It smells, it’s dirty, the people are pushy, the traffic is enraging to the point of acts of wild animal-like behaviour while I’m in the car.

I remember being a kid and let loose in the city. My best friends parents took us there for several summers, and I always enjoyed myself. I loved being in a big city acting like a grown up. Getting to go (within a reasonable distance from his parents) where I pleased and do what I wanted.

There’s only ever been one thing that I was certain about in my life, and I lose that certainty every once in awhile because I’m still that scared 17-year-old kid who is scared of the big city and what it’ll bring. I’m certain that I want to be an author. And I get so discouraged because there are celebrities writing books that aren’t as good as what I’ve written. Or stuff like (the biggest thorn in my side) 50 Shades of Grey that are getting noticed.

I worry about my future because being a writer means that I don’t have that certainty ever. I make alternate plans every other week because I’m terrified that I won’t have what it takes to become an author within the time frame that I want to be. I keep making plans that fall through because in my gut I know what I am but in my heart I’m scared to death that that won’t be enough.

I could write some inspirational thing about how I’m going to keep moving forward, how I will pull myself back up and keep going, how I know that in my heart I can do this. But the truth is, this week and for the last 20 years I’ve been able to write, whether it be my little kid chicken scratch making up stories to freak out my teachers, or my jilted mixed print and cursive hand writing that I stole from my 7th grade teacher writing about my life, that the whole truth is that I’m just plain old scared I’ll amount to nothing.

That by being a writer I’ve chosen a life based on rejecting all other occupations to fill the void because I can’t will a book deal into existence.

I am a writer and that’s that. I just have to keep getting out of bed when it comes to that. Get up, get moving, get writing, and even if I’m piss my pants scared:

Keep moving forward:Oh look, it came back to that no matter how hard I tried. Haha.

I’m finding that I’m reading a lot of books lately that are suggestions from another person. I’ve been reading these in all the in-betweens when I needed a break from Dance With Dragons and this one was top notch.

It was written in a very interesting way but it didn’t lose its story telling or take you out of the book.

The whole thing is written in email format to an old college friend of Ranks who had written a book about his life. (Rank’s that is) And Rank is pissed. So he decides to write his own book via email to his old friend. It’s a curious way of writing a book but I really enjoyed it. I felt on Rank’s side, but also saw what a brute he could be and the way she wrote this is so cool because it’s exactly like what writing an email is like and how a person’s thought process jumps back and forth.

Definitely read this one, it was cool just for the way the story was told.

Can we also appreciate that Seamus is in the background like WHOOHOOOOOOOO FINALLY!

The Deranged Librarian
Blog at WordPress.com.