I’ve been M.I.A. since Remembrance Day, which is all due to…laziness. Or super productiveness, whichever way you want to look at it.

Obviously, I’ve been working, the baby had croup, which was hella fun. Like hella HELLA fun. The other two have had snow days and we have a P.D. day today. Which means that while teachers are catching up on work and kids get the day off, people like me are getting to pick up the slack and search the seven hells of Pinterest for something for the kiddies to do on a day where normally I would be gearing up for the weekend and trying to trick the baby into sleeping longer so I can have a mind nap.

But no. Here I stand trying to figure out crafts for the kids to make that aren’t too babyish for the older kids but also won’t be too edible looking that the baby will think it’s okay to eat buttons.

On the other hand, while I’ve taken a break from typing, I’ve read a lot and I’ve made a crap ton of socks. I’m talking 9 pairs since September. I’m on the last leg (haw haw) of making Christmas socks and have three more pairs to go! And then I have to make the rest of the craft-like presents for people because I’m cheap and poor and would rather make presents than spend my money on stuff they don’t need.

Everybody needs homemade socks to keep warm at winter!!!! EVERYBODY.

Sooo….Hi. Is all I wanted to say. And Happy Friday. And Happy P.D. Day. And Happy Let’s Add Alcohol to our Coffee Days Because We Are Irresponsible Adults in Charge of Kids.

It’s okay if it’s a splash. My cousin okays it.

Stay tuned for us resuming things next week. Here is what I’m going to be saying all weekend to anyone who wants to make plans: 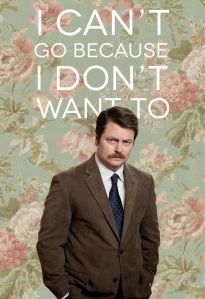