Have you ever been up night mind going in circles and then you fixate on one thing and then that thing becomes the thing that you are panicking about all week?

Hi there. My name is Allison.

And I Googled how many eggs I have left to procreate with.

And I’m still losing it.

Okay, so I get panic attacks every once in awhile. I have self diagnosed that I have social anxieties, which is triggered by my also being an empath and highly able to feel other peoples emotions and those usually affect how I feel throughout the day.

(Hello only hanging with a toddler because he has such good energy and his is the only one I can take most of the time haha.)

Well, when I’m PMSing all of that blows up like the goddamn Fourth of July, but instead of fireworks it’s anxiety attacks over something that I wouldn’t give two flying fucks over generally.

So I’m just sitting there on Saturday night after having a drink (just one.) and some pie and thinking in circles about nothing and then I couldn’t sleep because my brain wouldn’t shut up, so I made a terrible decision and Googled just how many eggs I will have left by the time I’m 30. (Rolling up to 29 in 2 months.) Because curiosity, right? Nothing wrong with that. Nothing wrong with a little internet check up on my lady parts.

ARE YOU FUCKING KIDDING ME?

This is especially traumatizing and panic inducing because of two things:

And 2. I want an army of children. (Probably up until I actually push a kid out of me and then I’ll be like “Just the one, please.”)

This has had my head spinning for days. Basically every woman in my mothers generation of my family had kids early. By this point my mom had all five of us, and I’ve always wanted five kids because we always have so much fun together. And I wanted to be a fun, young mom.

Then my cousins started breeding and it’s like they just couldn’t stop! And they’ve been doing that since at least being 25.

And now all my friends are like “Hey girl…we’re thinking about starting a family.”

“Oh. That’s less exciting than a dog, but I’m sure I’ll like your kid anyway because it’ll be a chubby non-talking version of you. I’m going to squish the hell out of its fat face.”

“You are always saying nonsense about things. Like making teacup humans.”

“You’re nuts for wanting to push something out of your cooter.”

Now, I’ve since then gotten my period. (Is this over sharing? I’m not particularly ashamed of getting my period, more annoyed than anything else.) Which means that I’m losing even more eggs.

…Guys. I’m freaking the fuck out.

Not enough to go full crazy and trap some random into having a kid with me, but enough that I sometimes cry during PMS because Daryl isn’t ACTUALLY my baby. [That level of bananas is happening man. What is my uterus trying to do here??? Get me pregnant. That’s what.]

But I might be thinking very deeply about going to get some eggs frozen because there is nothing more appealing to me than telling them that they are all Captain America when they are born. But really, that just seems a smart solution to my uterus trying to convince me at every turn that I need to let it serve its purpose.

Being not a girl but not yet a woman is really difficult.

I’m not done cooking, it’s rude that my body wants me to bake a bun. 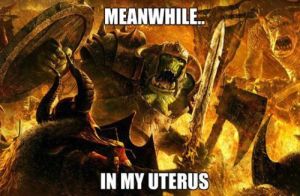 This picture says it all haha.