Simon is a teenager coming into his own, trying to sort out how to come out to his family and friends, and in general living the life of a teenager.

I love this book so much. I hugged it when it was over.

My sisters all agreed that it ended rather abruptly for our taste. WE NEEDED MORE.

Beautifully written, lovely story, a mystery as to who he was falling in love with through email, and just all around greaaaaat book.

Everyone should read this book. EVERYONE.

I can’t wait to read the next one!

My friend who normally suggests incredibly upsetting (cough cough World War 2) books to me suggested this.

Now, this has taxidermy on the front so you can imagine my dismay and skepticism at what I was about to walk into.

But blindly walk into it I did and I was surprised as fuck and happily proven wrong.

This book was HYSTERICAL. I read it so friggin fast and loved every minute of it.

This lady knows how to get you to wet yourself laughing!

I enjoyed her tales of taxidermy collecting, how she terrorizes her husband Victor, and the way she talks about mental health and well being.

I always trust that when I pick up a Cecelia Ahern novel that I’m going to like it. There’s just so much magic in her stories that I really love them all.

I also trust that I’ll cry like a little bitch and be devastated for days.

I really like what she did with this story, it was quite fun.

Lucy finds out she has an appointment with her life. And her life is a physical human manifestation that she actually gets to MEET and talk to and stuff gets sorted out.

Which had me thinking, what would MY life look like if I were to meet her?

I decided this moment in time where Hermione is struggling to function in potions class in their fifth year.

Constantly being like “What the fuck am I doing? What is going on? Getting overwhelmed.” Hair is a mess. Attitude needs an adjustment, and I’m just doing too many things ALL the time.

I feel for Hermione. But she’s a badass bitch. And so am I.

That took a turn.

I have a juvenile mind where I don’t find these scenes sexy: I find them absurd and a good gut laugh.

I actually really like Sylvia Days writing, and she spun a good yarn while still keeping with certain romance novels tropes but without making the tropes seem corny as hell.

Not once did she mention anyone with an aquiline nose. Which now that I say that…what in the hell does that even mean???

Oh snap. I looked it up and it says “Like an eagle”. I had no idea! I thought it meant like perfect ski slope or something.

Or does it? Probably not.

I needed some young adult in my life after reading Lolita.

WHOOOOOAAAA what a horrible way to phrase that.

And yet I left it so you could read it and be mortified with me and for me.

Anyway: I love YA novels that have heart. And murder. Lots and lots of murder. And mystery. But mostly murder.

Is something wrong with me? Who knows. But this book was SO. DAMN. GOOD.

This book is about how Eden who had a pretty good life (talking good parents, nice house, just above middle class upbringing) until the revolution happened and then she was left with only a handful of relics and clues from her dad about where a secret island is. That which is a sanctuary to all those who reach it. Far from the horrible daily grind of living in a hellish world.

And I believe there was a hot ginger in there somewhere that had me happily trailing along through this book.

Read this if you were into The Hunger Games. Because it’s sort of like that but somehow more mature? I don’t know.

I want to repeatedly stab it. While also suggesting that people read it?

It was confuddling because it makes you feel sympathy for a pedophile at one point because the 12 year old girl is being mean to him.

Hats off to this guy because DAMN DUDE. I was bound and determined to hate this book because of its context (and I did). But I NEVER thought I was going to be like “Oh poor Humbert.”

Which made me audibly yell “WHAT?!” after I thought that and put the book down for a few days.

It took me a long time to read this because I needed to take Soul Breaks. It was grossing me out and I needed to put it under Jeremiah Duncan (the ceramic pig I have on my kitchen table) and leave it there for weeks at a time.

I have a wrinkle on my nose from scowling at it that I have nicknamed ‘Lolita’.

Once again, this is a devastating and life ruining book my friend suggested to me because it was SO BEAUTIFULLY WRITTEN YOU FORGET WHAT IT’S REALLY ABOUT FOR PAGES AT A TIME.

Or I’m an evil witch who accidentally marks a person for death upon reading their autobiography.

This book was so fun to read and incredibly interesting!

I love a good autobiography these days and I really enjoyed how this sounds how he talked. His stories were cool, his life was amazing, and his heart was big as all get out.

And man did he love Sally Field.

And hate that photo shoot on the rug. He even wrote in the book how when he dies he hopes that no one remembers him JUST for that.

Go figure on social media that’s the picture EVERYONE and their mother was putting up to commemorate him.

Rest in peace you hairy bastard.

I just wanted to remind y’all that I have a book club on Instagram now!

It’s called “DerangedBookClub” and you can follow what I’m currently reading and join in the Instagram Live at the end of each month to hear my thoughts “in person” and actually kind of talk to me!

How fun! And weird. But I’m getting used to it.

Join up and say Hiiiiiiii! 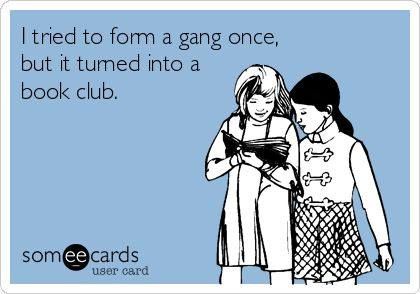 Sometimes I give in and read popular books to see what the big fucking deal is.

“Gone Girl” is an example of this. I read that because I didn’t want the mystery ruined. But I did not like that book. I could not remotely relate to the characters or understand their motivations. It seemed far-fetched.

I read “Life of Pi” and was like “Meh. It was okay. Kind of annoyed at the ending.” *awkward shrug*

I read “Simon VS. The Homosapiens Agenda” and was like ‘HOLY MOTHER OF FUCK THIS IS SUCH A GOOD GODDAMN BOOK EVERYONE MUST READ THIS AHHHHH” And threw it at everyone I know.

But that’s a story for another day.

The point of my saying this is that sometimes books exceed my expectations. Sometimes.

SO where does “Big Little Lies” rate? On a scale of Gone Girl to Simon?

Somewhere in the middle.

It was well written, and shocking in parts, and then everything exploded and I was left like “WHOA WHAT.”

I didn’t think there was going to be so much intrigue in a book about three mothers and how they all come to be friends.

But sometimes a book is suggested by the entire world for a reason.

Because it explodes at the end.

Not…not literally.
Although WHAT a surprise that would be!

I had been anticipating this book on my shelf for sooooo long. I LOVE Krysten Ritter. I like every character she’s played, I follow her on Instagram and love that she’s a knitter and does that in between doing scenes for shows and movies.

I love her little weasel of a dog, Mikey.

Did I LOVE this book?

I wanted to soooo bad.

I commend anyone who writes a book. Writing books is hard. Like really really hard.

And I super commend actresses and actors who write them because so much stigma comes when you write a book as an actor. People think you have a ghost writer, or that it’s going to be some fluffy piece of crap that’s just to make money.

Let me tell you this: This was NOT a fluffy piece of crap. This was a thought out mystery and well written.

I just did not dig it as much I wanted to. Which was probably WHY I didn’t dig it. I built it up for too long and should’ve just read it when I found it.

This book is about an environmental lawyer who goes home after a long stint of avoiding it.

GoodReads does a better job of describing this:

It has been ten years since Abby Williams left home and scrubbed away all visible evidence of her small town roots. Now working as an environmental lawyer in Chicago, she has a thriving career, a modern apartment, and her pick of meaningless one-night stands.

But when a new case takes her back home to Barrens, Indiana, the life Abby painstakingly created begins to crack. Tasked with investigating Optimal Plastics, the town’s most high-profile company and economic heart, Abby begins to find strange connections to Barrens’ biggest scandal from more than a decade ago involving the popular Kaycee Mitchell and her closest friends—just before Kaycee disappeared for good.

Abby knows the key to solving any case lies in the weak spots, the unanswered questions. But as Abby tries to find out what really happened to Kaycee, she unearths an even more disturbing secret—a ritual called “The Game,” which will threaten the reputations, and lives, of the community and risk exposing a darkness that may consume her.

With tantalizing twists, slow-burning suspense, and a remote, rural town of just five claustrophobic miles, Bonfire is a dark exploration of the question: can you ever outrun your past?

It was good. But not Argh inducing. You know? When a book is so good when you are done you’re like ‘AAAARRGGHHH I NEED SOMEONE ELSE TO READ THIS SO I CAN TALK TO THEM ABOUT IT!!!!!”

Overall, good summer book to read lazily on the beach.