This week has been so overwhelming that I finally snapped last night after my lessons.

Now, I’m not someone who cries easily, it takes a lot to get me to bawl my eyes out and have an anxiety attack. So that should show it’s been a tough month.

We had a couple of hard things to deal with as a family, and just confusing emotions all around, and with family visiting from Italy and friends wanting to spend all summer doing stuff, weddings and events, friends who rely on me to help them with their own anxiety, add on lessons, practice, finding time to write while also having a full time job of entertaining children for 10 hours a day, spending time writing on here trying to be inspirational and funny, making cross stitches for everyone and their mothers, and then throw in a work out attempt at least once a day on top of trying not to get sucked in by the internet, it makes for a pretty stressful (but fun) summer.

Not an excuse, just my life.

I don’t think I’ve looked Doomsday in the eye for a month, guys.

Or seen my dogs that much this week besides seeing Goose on the stairs in the morning looking pathetic. I don’t even know what Artie looks like these days.

I’m fucking exhausted. Which if you’ve seen me in person and notice that not only am I not bothering with eyeliner anymore (one of my staples), but that my hair is thrown up in to some hot mess of a bun or braid, or the fact that nothing I wear lately even remotely goes together, you’d notice.

So when someone points out that you are slacking in some areas of your life while you had already been thinking that the one thing you are passionate about, the one thing that you want to be doing with your time, you were missing out on because of all this other stuff? Things don’t really go so well.

While Giles was not trying to make me feel bad while explaining that I needed to find an extra half an hour a day to suss out what I’m doing with my piano, he did. And to be 100% fair to him, he was being nice about it. Didn’t curse at me, didn’t talk down to me, didn’t throw a blunt object at my head. A nicer person in such a situation you couldn’t find.

And that’s probably what it upset me so much. He just had to be kind, didn’t he? That fucker.

It was the straw that broke the camels back and I ended up crying in my truck for an hour before I got home.

First I was pissed off. Then annoyed. And finally just broke down in tears because he basically made me feel like shit because I wasn’t giving a portion of my life enough attention. While pointing out that other people were making time for it. Other people were finding that extra half hour. Other people sell their beds and make room and are absolute perfection.

That’s not the point of this.

The point is that you only get to see small portions of people lives.

Okay, that wasn’t the point either.

I took the time to really think about what he was saying and how it extends passed my lessons and into what I had already been feeling this week.

I get being passionate about things. And the fact that I haven’t found the time to write this summer is actually eating at me more than not finding the time to practice piano. It’s actually the real reason I started crying. I don’t have time for my normal outlet and I feel like I’m walking around with all my pieces sewn together with silly string. The tears were just writing coming out my face instead of my hands.

Other people are encroaching on my time and while that just seems like an excuse to some, it’s not. My daily routine normally allows for that half hour and these past few weeks it didn’t.

I probably should’ve suspended lessons for the summer so this wouldn’t happen, but whatever, I’m not completely psychic.

Anyway, this is all my backwards way of summing up that I’m going to be dropping some things the rest of the summer in order to give attention to the important things.

The internet is my biggest time suck and I need to detox anyway. I find myself aimlessly looking at Pinterest for hours, or online shopping and then ending up emptying my cart anyway.

Why not just cut myself off? Those are the hours I could be spending writing.

Which means for a couple of weeks I’m going to be taking time off from writing here. As much as this is one of my favourite things I’ve been dropping the ball anyway and it’ll be better to start up once things are all sorted.

So on this last day of us talking for a while I just wanted to say a few things to you:

There is always something you can do to help yourself. And while punching people in the throat is fun, I think that there are more constructive ways to go about that.

Like tossing them down the stairs. More limbs to potentially injure. Just kidding!

Take care of yourself, treat yourself with respect and speak kindly. Sort out the things that are wasting your time and keep going.

And if you are the person pointing out that someone is slacking in an area of her life, make sure you’re nice about it and not comparing them to other people. Everyone is different and some people are actually trying their best even when it looks like they are fucking everything up.

At the end of the day you are responsible for how you spend your time and no one should tell you how to spend it.

Try your best and forget the rest.

That’s a Paw Patrol quote. Thank Marshall for that one. That’s the pup in charge of fire safety. And I know that because I spend 10 hours of my day with children.

So I know what I’m talking about.

Keep moving forward. See you when I see you. And remember, it’s okay to cry. Tears are just your allergic reaction to horseshit.

For the record, Giles wasn’t being an ass, he is passionate about music. Obviously. And seeing other people not having a hard on for music is probably the equivalent of me seeing people who don’t read. What is this nonsense you speak of? Does not compute. Does not compute. Traitor to the throne! Traitor to our Queen! Exterminate! EXTERMINATE! ….I don’t know why we just became Daleks. 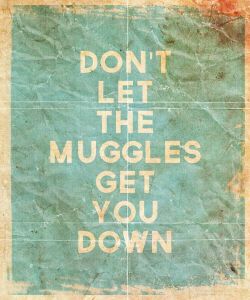 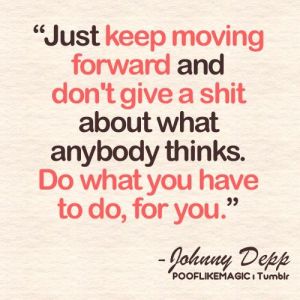 Dreams are even more important. And let’s be real here, you are never too old, too young, too dumb, or too small (or big) to achieve your dreams. Cornball city, I know. But for me, without my dreams nothing would ever get done. A handful of hope, a heart full of dreams, and a complete and utter disregard for time are what keeps me moving these days.

I’ve wasted a lot of time, so I know what I’m talking about when I say that it doesn’t really matter. You can be whatever you think at any age; As long as you have the gumption to try.

That’s an important word, which I’m sure you’re noticing every week in these new posts. TRY. A tiny word, but it’ll move mountains if you give it a shot.

Someone this week told me that I would “be next” for getting married and having kids in our family. And if she were a witch I would be terrified. But alas, she’s my grandmother and although I’m sure she has some mystical powers, she does not have the mojo to do this to her family members. Although the last time she said that it did happen even though there were older members of our family we thought would be next in line.

I’m only 27 years old. I have a lot of life to look forward to. I’ve traveled a lot, I’ve been to school and finished it, I write and try to get published every once in awhile, and sometimes I even attempt to flirt with the opposite sex.

…I think I’m talking about this because I kind of feel like she gypsy cursed me. I’m talking myself in circles here.

I’m going to do things for my future real soon and I’m terrified I’ll fail. Which means I’m on the right path. Anything that scares the holy hell out of me is worth doing just to get over that fear. (Hello skydiving, going to school, moving across the country, living in France, getting a tattoo, singing, learning, speaking, standing up for myself, being present and aware.)

If it doesn’t give me anxiety I’m going in the wrong direction. I’ve got to keep moving forward and put my blinders on to that stuff or I’ll burrow into a place of confusion and self doubt and waste more time. 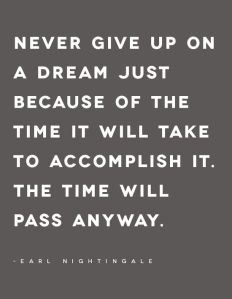