This week I was feeling like a bag of garbage. My haircut is currently a mess due to growing it out for a wedding next year. (Through no fault of my friends, I’m sure she doesn’t give two shits if hairdressers have anything to work with come the time of her wedding.) My eyebrows were starting to look like individual angry Hulks, ‘stache city, and gnarly nails.

While looks aren’t the most important thing to me (they only make Top 20 because I try not to completely tip over into looking like a street urchin, and I work with kids and have wrestling matches so what’s the point in my hair looking good during the day? Most of the time I come home looking like I’ve been wrestled by a mongoose not a two year old.) it’s interesting the affect it takes on a person.

What in the actual fuck.

GARBAGE? I was calling myself ‘garbage’. I am not:

noun: garbage
1 wasted or spoiled food and other refuse, as from a kitchen or household.

2 a thing that is considered worthless or meaningless.”a store full of overpriced garbage”

I am not overpriced garbage.

I know this. Most of the time. So in a bid to snap the hell out of it. The simplest thing would be to remedy all the things that were bugging me physically.

I decided that I would pamper the hell out of myself yesterday and show myself I’m not garbage, and thankfully my favourite salon had an opening.

In the grand scheme of things I care very little about eyebrow hair. And even less about a blonde barely there moustache hair. So those would be the first to go because it’s ridiculous to give them a second though. So boom. Gone. Sleek as fuck.

The most important thing I did yesterday was for a body part I use the most and think of treating the least.

My hands. My lovely 29 year old hands have been bruised, battered, cut, slammed, poked, prodded, and beaten to hell. And all that’s just from cross stitching and knitting.

So I decided to get a manicure. Something that I haven’t done probably since prom. At the very least. And because I usually just cut my nails short and call it a day because I’m always doing something with them that messes up my nail polish so what’s the point?

The point is the hand massage bitches.

Why haven’t I been doing that more often? Forget the cuticle cleaning, or even the applying of nail polish or any of that. The hand massage alone was exactly what I needed. If you can’t afford/don’t care about getting your nails done, get someone to massage your hands with moisturizer. Because it was so lovely!

Plus the girl doing my nails told me ghost stories, which was fun. Haha .

My point is: Don’t talk to yourself that way. I’m trying really hard not to. Treat yourself to something you wouldn’t normally treat yourself to. Be kind. (Always) And then go and buy the on sale Kardashian moisturizer and perfume kit for $13 at Winners like a goddamn queen.

I went spa crazy yesterday. I even bought one of those weird things that pulls out your blackheads and those weird towel things that’s not a towel that wraps around your head so that you don’t damage your hair. And an on sale Ralph Lauren bathrobe.

Because I’m a mother fucking queen.

I also only buy things on sale now because I’m a cheap queen! haha.

Whatever. I feel like a million bucks for under 200 bucks.

Treat yo self. Keep moving forward. 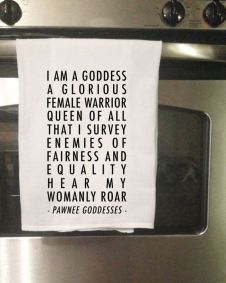